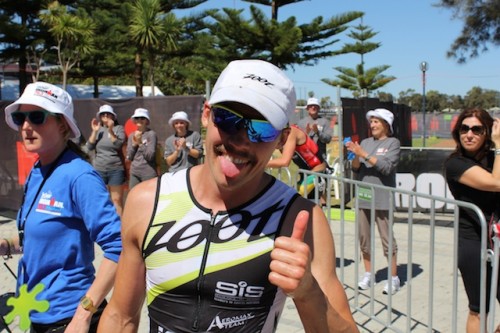 This week I had a couple of my coaching clients tell me that I wasn’t on the big sponsorship bucks because I was a little bit too humble and needed to put myself out there a little more. A preposterous thing to say, evidence only that they don’t know me very well. I’m arrogant. My ego is enormous. Let me take you inside my mind. My parents recognised this passion to be the best and to believe I can be early on and quickly taught me how to keep it to the confines of my own thoughts. However fear not, the arrogant thoughts are still there, just not outwardly expressed. Please don’t mistake that as humility. I’m good at recognising my weaknesses and even better at recognising my strengths.

The past few weeks have been a nice challenge for the ego as I chauffeured Matty White to the press conference soon after arriving in the gorgeous town of Mandurah. A month earlier I was getting hand-balled from one email address to the next just trying to get someone to process my entry for this race and as I sat at the back of the room behind the cameras making faces trying to get ‘the race favourites’ to laugh mid speech I couldn’t help feeling a little frustrated. Since turning professional in 2010 I’ve had 30 professional podium finishes, never finishing outside the top 5 in Australia. The guys on the panel here were flown over and staying in the Sebel. All of whom are totally deserving but not even a processed entry for young Tim? I would have let it go but then soon after the race I got told I wasn’t going to get an entry to Noosa triathlon and my anger needed venting. Vented. Thank you, I feel much better.

On a positive note, a huge thank you to WTC who through their influence have forced prize money in Australia to see drastic improvements in the last three years. Mandurah was offering a delicious $50 000 prize pool. Credit also has to be given to Ironman Asia Pacific/USM for setting up a great race.

The question the media was asking was “can anyone can beat Clayton Fettel?” My ego quickly said yes of course  while my voice of reason said they had a good point. It was going to be difficult. The race that still stung the most was Port Macquarie 70.3 last year where I felt I was in great shape and he polished me off by 2 minutes starting the run with an enormous lead. I was hugely complimentary after the race (an option he should consider post races that don’t work out for him) but made the comment that while he was an amazing athlete I felt he was very beatable, I would just have to change my race tactics and training. When you’re not racing friends you want them to excel but when you’re up against them there is nothing more motivating then trying to beat them. In my mind he is the best swimmer in our sport. He is also commonly toted as one of the best cyclists too which I disagree with. A great cyclist certainly, however I’ve raced the best bike riders in our sport and he’s not on that level yet, with an emphasis on yet as I believe he could be. His greatest athletic attributes are his single minded dedication to becoming the best in triathlon avoiding the common distractions (distractions have always been my weak point), incredible work ethic, no one trains harder and self belief that he is best backed up by those in his close circle.

A perfect day presented itself for racing. I was a little bummed that the swim was current assisted. Having been able to put in a lot more swim milage in since reducing my coaching hours I knew I was swimming better than I have before and thought there might be an opportunity to get rid of a few contenders early. Namely, Tim Berkel who I didn’t want to get into a running race with. I felt very bad for Clayton as this would instantly steal time from his inevitable lead out of the water. Im sure this will be rectified for next year with a looped course and if not it would be cool if every second year it was an up-current swim to turn the advantage  toward other athletes with swimming as their strength. As it turned out however, the current only made the swim 2 minutes faster then usual so it was not as drastic as I thought.

I exited near the front of the swim. The most laid back man in triathlon and Ironman Australia winner Paul Ambrose had a slick transition and had a 150m lead immediately onto the bike. I was delighted. My ideal plan was for Ambrose to be up ahead and then I would attack away from the group bridging the gap to him and Ambrose and I would ride together to motivate each other stay keep the speed high and gain on or keep the same speed as Fettel. It’s nice to have dreams. My pre race theory being that if Clayton started to get the whiff of victory he was going to push that ride from the start right to 90kms. Not something I wanted him doing. So instead of training my steady state below threshold power that I normally ride a 70.3 at, I did my Olympic Distance threshold training going in, planning on riding closer to the that intensity for 40kms averaging closer to 320 watts instead of 270-300.

Everything was going so swimmingly as I bridged up to Ambrose leaving a 50m gap to the group except for the rock solid Kiwi, bloody James Bowstead. We kept driving the pace and while we would get 30m-40m away, James was just there with a long line of athletes behind him keeping up no worries at all. Both Matty White and Tim Berkel commented post race that they didn’t feel right in the first 40kms and couldn’t’ get comfortable. That’s because it wasn’t comfortable! We were going nearly 2kms/h quicker than other 70.3 races. It seemed nearly everyone was on the rivet.

To address the drafting controversy, was there drafting? Yes indeed. It was extremely frustrating watching guys ride 7 metres apart with officials right alongside them. The officials were obsessed with ensuring overtaken athletes dropped back 12m so quickly after being passed that you almost had to put your brakes on to please them and then reaccelerate expending way too much energy to get back up to speed when the focus should have been on getting the group to maintain a 12m gap. I’m not sure what the answer is here as I do really appreciate that officials give up their time to help support the integral part of non-drafting racing. Also, I do believe it was only a few athletes not so experienced in this format of racing making the group look bad and while I have no problem with people who raced making comments it’s annoying when people that weren’t there add there 2 cents. Particularly when some of those are athletes who are well known for pushing the drafting gap limit. I do think that the results could have been slightly different without the smallish gaps. I think James Bowstead could have finished higher, as could have Clayton however I know from my average and with Berkel averaging 295 watts the catch would have happened on the run regardless but later on in the day.

By 40kms I could see that the break from group was not possible however had ensured Fettel had not gained any time and decided I needed to start thinking about the run as I was stuck with Berkel behind me. By 60 kms I was starting to get hypoglycaemic and needed to slow down to absorb some calories. Obviously Bowstead wasn’t feeling the same and kept up the same speed we had been doing riding around me with Tim Berkel legally in tow and I simply couldn’t’ go with them and still run well, I needed some sugars after operating on my threshold for so long early. The people behind me didn’t even know that they had got away. That moment proved the winning move for Berks. The still young veteran had ridden the ride perfectly. His strength is his diesel engine which needs very little fuel to go extremely fast without anything explosive for very long periods of time. He knows from experience that his best bet is to play his cards when everyone is spent. Just as courageous in my books as an athlete who knows that there only bet is to swim and bike to get as big a lead as possible to try and hold on in run. You have to play to your strengths.

Berkel, Bowstead and Fettel went onto the run together 2 minutes 30  ahead. I believe my run form is slightly better than Berks at the moment but only slightly plus the chance of him falling apart is minimal so I wasn’t confident the catch was possible. However I had a more immediate problem at hand with former ITU athlete Ruedi Wild running by my side. In his pleasant Swiss manner he suggested that we work together on the run taking turns in front to break the wind. I was more than happy to do so ensuring that my turns coincided nicely with each aid station. Ruedi was relying solely on coke for his run nutrition and early on there was not always a lot of coke being held out so by the time I had greedily taken two cups for myself poor Ruedi was left with only a cup of water. We passed Fettel who honourably gave me a nice pat on the back as I went past and then later Bowstead. As I expected, by about 10kms Ruedi started to drop off and I was left seeing if there was a chance of beating Berkel. Despite taking 45 seconds out of him on the first 10kms we ran the next 11kms fairly similarly and Berkel would go onto win. I was genuinely happy for him. He has been a great friend over the years and was one of the guys that encouraged me to have a crack at the pro caper early on. I finished 2nd with Ruedi 3rd, Matty White charged into 4th with his usual strong back half of the run, a brave effort given he was coughing and snotting everywhere all week.

Thank you again to the people of Mandurah for the brilliant support, a beautiful and fast course and a finish chute to remember. I look forward to racing next year.

Next up Nepean Triathlon, Shepparton 70.3 before finishing the year at Canberra 70.3. Hope to see you there!